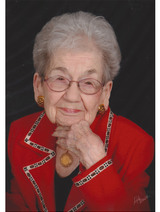 Annette Vinson Ward, 96, died on September 5, 2015. She was born to Aubrey and Addie Mae Vinson on December 27, 1918 in Coolidge, Texas. She graduated as valedictorian from Coolidge High School in 1936. She then attended business school in Dallas, Texas before joining Sears Roebuck. She started as a secretary but retired as the Personnel Manager for Sears Fashion Center in Garland, Texas. She was a member of the First United Methodist Church in Coolidge before becoming a member of the Church of Christ in Dallas. She was happily married for nearly 29 years to her childhood sweetheart, Wilmer (Bill) Ward, until his death on May 4, 1971. She was a faithful member of Preston Road Church of Christ for 37 years where she volunteered at the food pantry, now known as CitySquare, for more than 15 years. Her cooking skills were second to none and nothing pleased her more than a houseful of children, grandchildren and great-grandchildren all together enjoying the great food from her kitchen. Mrs. Ward loved to travel with her family and with friends, especially her dear friends, the FAARPs. She was preceded in death by her husband, Wilmer (Bill) Ward; her parents, Aubrey and Addie May Vinson; and her brother, Jack Vinson. She is survived by her son, Wilmer (Bill) Leroy Ward and wife, Karen, of Coolidge, Texas; her daughter, Suzanne Ward DePaul, and husband, Gil, of Georgetown, Texas; and her grandchildren, Clint Ward, Jon Ward, and Roy Ward of Coolidge, Texas; Amber Ward Williford and husband, Clint, of Mexia, Texas; Adrienne DePaul of Seattle, WA; and Marcus Ward DePaul of San Antonio, Texas as well as 6 great-grandchildren and many nieces, nephews and friends. Memorial services will be 2:00 p.m., Friday, September 25, 2015 at Preston Road Church of Christ in Dallas, Texas and 11:00 a.m., Saturday, September 26, 2015 at the First Methodist Church in Coolidge, Texas. In lieu of flowers, the family requests that anyone who wishes to, please make a contribution to CitySquare (511 North Akard, Suite 302, Dallas, Texas 75301), Christ's Family Clinic (6409 Preston Road, Dallas, Texas 75205), or the First United Methodist Church of Coolidge, Texas 76635. The family would also like to thank the wonderful caregivers at the Forum on Park Lane in Dallas, Groesbeck LTC in Groesbeck, Texas, and Providence Hospice of Mexia, Texas as well as Dr. Hugh McClung of Dallas and Rettig Family Clinic in Groesbeck.

To order memorial trees or send flowers to the family in memory of Annette Ward, please visit our flower store.
Send a Sympathy Card