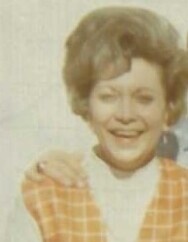 Services will be held to celebrate her life at noon on Saturday, September 18, 2021, in the chapel at  Blair-Stubbs Funeral Home in Mexia, Texas with Rev, Shane Norcross officiating. Visitation is scheduled for one hour prior to the service.  Burial will follow in the Mexia City Cemetery.

Delight, as she was known to her friends and family, was born November 10, 1934, to Lester and Allie Lee Davis Henderson, in Lost Prairie, Limestone County, Texas. She was raised in Mexia and graduated from Mexia High School. She was married on June 11, 1952.

Delight worked for many years for Sears, Roebuck and Company until her retirement.  Thereafter she worked several years for MP instruments, a family business comprised of longtime friends, The Pates.

Delight was an active member of Rittenhouse Baptist and later a member of the Airline Manor Baptist Church in Houston.

She enjoyed traveling in her retirement and those ventures often included her brothers and sisters.

The family would like thank all those who helped her (neighbors, friends, caregivers, group home, etc.).

To order memorial trees or send flowers to the family in memory of Bernice Clary, please visit our flower store.