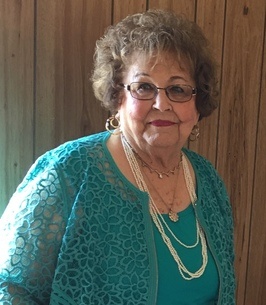 Visitation with the family will be 5-7 p.m., Thursday, at Blair-Stubbs Funeral Home.

Blanche was born October 21, 1926 in Speigner, Alabama to Horace McCoy and Mary Exa Mattox Russell. She married Charles W. Frazier, Sr. on July 26, 1947 in Tyler, Texas and they were blessed with four sons, Charles, Jr. "Chuck", Lex, Mike and David. They moved to Coolidge in 1972, established Frazier and Frazier Industries, became a vital part of Coolidge and made it their home. Blanche also opened her own business in 1974, The Unlimited Corner and maintained it until 2005.

Blanche lived every day, serving the Lord, taking care of her family and, willingly, helping others. She had a big heart, generously gave to those in need and always willing to volunteer for projects that would help better the community. Anytime she knew a family had lost a loved one, she made sure there were several large dishes of food delivered to them. Blanche loved and respected everyone and treated them as she wanted to be treated; she was a true example of the Golden Rule "Do unto others as you would have them do unto you".

As a longtime member of the First Baptist Church in Coolidge, Blanche served as a Sunday school teacher and on the Finance and Decorating Committees. She served as Vice Chairman of the Board of Coolidge Housing Authority and on the Coolidge City Council. There was a time the Coolidge Garden Club wasn't meeting, due to having to abandon their building. Later, they were able to secure a room in the Civic Center and Blanche voluntarily decorated the room, at her expense, and was instrumental in helping reorganize the club; she served as president for several years. She also served on the Parkview Regional Hospital Board for 25 years.

In addition to enjoying time with her family, church and civic activities, she enjoyed having garage sales.
She was preceded in death by her husband of 53 years, Charles W. Frazier, Sr.; grandson, Charles W. "Will" Frazier, III; brothers, Horace, Jr., Buddy, and Paul Russell; and sisters, Annie Mae Scales and Lillian Pearl Russell.

Blanche's family would like to express their deepest appreciation for her caregivers, Maria Lozano and Victor Guiterrez for their loyal and loving service of many years, as well as her most recent caregivers.

To order memorial trees or send flowers to the family in memory of Blanche Frazier, please visit our flower store.
Send a Sympathy Card