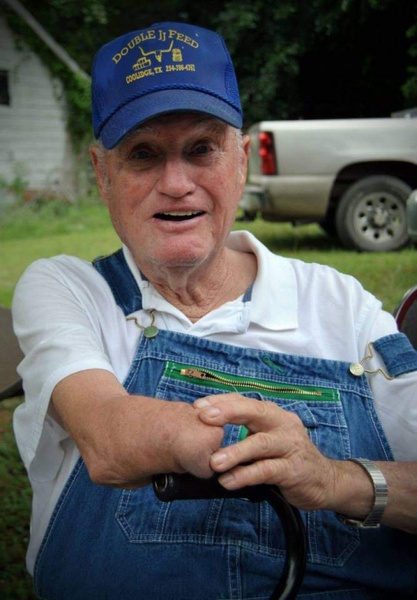 Bobby Lee Jacobs, longtime respected and admired, father, teacher, coach, mayor, and businessman of Coolidge, passed away at his home, surrounded by his family, on December 4, 2020 at the age of 88.  Visitation with the family will be 5:00-8:00 p.m., Monday, at Blair-Stubbs Funeral Home.   A graveside service will be held at 3:30 p.m., Tuesday, December 8, 2020 in the Coolidge Cemetery with Bro. Mike Smith officiating.  Drew Jacobs, Bradley Bruckner, Jeffrey Nash, Ricky Davis, Bob Shirley, Mark Chapman, and Terry Dan Greer will serve as pallbearers.

Bobby was born August 26, 1932 in Corsicana, Texas to Arvil Lee and Myrtle Jergins Jacobs.  In 1951, he graduated from Rice High School where he excelled as a pitcher in baseball.  His love and ability for playing baseball earned him a scholarship to Navarro College.  Bobby continued playing baseball for the Army, as he served from March 1953 until March 1955 and received an offer from the Red Socks to try out as a pitcher.  However, his pitching career ended due to an accident on Good Friday in 1956.  After recovering from the accident, he entered Sam Houston State University and received a Master’s Degree in Education and Science.

Bobby taught school in Whitney, Aquilla, Iredell, Maybank, Oakwood, and Coolidge.  In addition to teaching, he coached girls basketball and boys baseball in some of the school districts.  He also held positions as an Elementary Principal in Maybank and High School Principal in Coolidge.  He served as an Educator for a total of 33 years.

Bobby did not know the meaning of retirement, he continued to be involved in education and serving the community.  He was a hard worker and willing to do whatever it took to work in the best interest of Coolidge and those who lived there.  His love and concern for children ranged from education to coaching little league baseball and beyond.  He served as Mayor of Coolidge for 20 plus years.  Bobby was also an active member of the First United Methodist Church.  Of the many things he enjoyed, fishing and running trotlines were among his favorite things to do.

Although Bobby was involved in numerous outside activities, his family was always his priority.  He was a devoted and loving husband, father, grandfather, great grandfather, and great-great grandfather.  His children knew he was a busy man but never too busy for them and always had their best interest at heart.  He was also blessed with the wonderful support of his wife, Patsy, for almost 68 years; they married in Corsicana, Texas on January 31, 1953.

Please visit www.blair-stubbs.com to leave the family a message of condolence or sign the guest book.

To order memorial trees or send flowers to the family in memory of Bobby Jacobs, please visit our flower store.