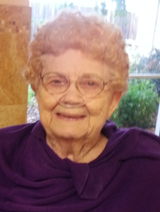 Brenda Greer Craft,RN, 96, passed away May 9, 2015 in Mexia. Funeral services will be 2:00 p.m., Wednesday, May 13, 2015 at Blair-Stubbs Chapel with Rev. Marcus Sheffield officiating. Interment will follow in the Mexia Cemetery. Brenda was born May 31, 1918 in Farmersville, Texas to B. H. and Margie Glass Jean, the oldest of three daughters. After graduating from high school in Carlsbad, New Mexico at the age of 16, she continued her education, graduating nursing school in McKinney, Texas and Parkland Hospital in 1939 with her RN Degree. Brenda worked for the American Red Cross at Baylor Hospital where she became their first Infusion Nurse. She volunteered, during WWII, at Camp Roberts, Camp Pendleton and Catalina Hospitals. Afterwards, she returned to work at Baylor Hospital and then moved to Mexia in June 1947. In 1951, Brenda became the Director of Nurses at the Groesbeck Hospital. She later went to work for Brown Hospital in Mexia and ran it until it closed, at which time she helped in opening General Mexia Hospital. Brenda's lengthy nursing career ended as Director of Nursing at the Mexia State School where she was instrumental in helping their Staff Development Unit get started. Brenda and Oscar Greer married in 1939 and they were blessed with two daughters, Karen and Kathi. She was a busy nurse but being a loving wife and mother took precedence over everything else. After Oscar's death in 1967, she married Herbert Craft in 1990. Brenda was also instrumental in starting Bridge Clubs, after moving to Mexia in 1947. She enjoyed spending time with her family, traveling, golfing, and attending church. She was a member of the First United Methodist Church where she was chairman of the Sunday School Class for over 30 years. She was also a member of the Order of Eastern Star. Brenda's love for the Lord was evident in the way she lived her life. She also loved the United States of America and those who served to protected it; she was very patriotic. She was preceded in death by her parents; husbands, Oscar Greer and Herbert Craft; two sisters, Beverly Hardin and Jessie Morgan; and great-granddaughter, Kristie Mitchell. Brenda is survived by her two daughters, Karen Bounds of Mexia and Kathi Greer Murphy of Richmond, TX; grandchildren, Kelly Bounds and wife, Katrina of Mexia, Jason Murphy & wife, Sandra of Richmond, Jenny Cervantes and husband, Oscar of Richmond; great-grandchildren, Reagan Bounds, John McClinton and wife, Katherine, Danielle Smith and husband, Rusty, Grace and Trenton Murphy, Xander Cervantes, Meredith and Owen Cervantes; nieces, Jean Hyatt and husband, Bill and Kandis Hinojosa and husband, Beano; nephew, Kelly Hardin and wife, Benita; and a number of great nieces and nephews. Brenda's family would like to express their special thanks to the Mexia LTC and Parkview Regional Hospital for the loving care given during her time of need.

To order memorial trees or send flowers to the family in memory of Brenda RN, please visit our flower store.