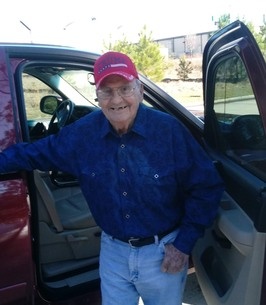 Buford Wilburn York, formerly of Willis, Texas, passed away August 10, 2019 in Conroe at the age of 88. Graveside services will be 2:30 p.m., Tuesday, August 13, 2019 at Lake Chapel Cemetery near Fairfield, Texas with Judge Ray Jones officiating.

Buford was born May 4, 1931 in Fairfield, Texas to Albert and Rena Ivy York. Prior to becoming a truck driver, he owned and operated three steakhouse restaurants in Fairfield for several years.

While growing up in Fairfield, Buford's exposure to rodeoing created a "cowboy" that he never outgrew; his love for rodeoing and being a cowboy remained a part of his life forever. Watching bull riding was his favorite part of the rodeo and in later years, when it was on TV, he wasn't about to miss it.

Buford loved his family and spending time with them but, like most grandfathers, time spent with his grandchildren was extra special. He liked to spend time fellowshipping with others, telling jokes and stories, as well as, deep sea fishing, watching wrestling and working cattle.

He was preceded in death by his parents, Albert and Rena York; wife, Teresa York; and sister, Janell York.

To order memorial trees or send flowers to the family in memory of Buford York, please visit our flower store.