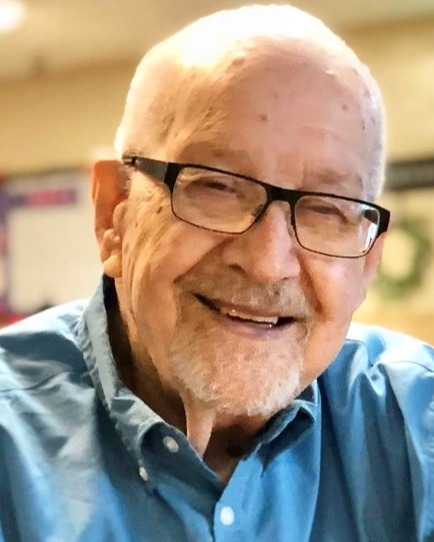 Calvin Dwain Prowell passed away November 5, 2022 in Mexia, Texas at the age of 92.  Funeral services will be 1:00 p.m., Tuesday, November 8, 2022 at the Northcrest Church of Christ.  Visitation with the family will be prior to the service beginning at 12:00 p.m. Interment will follow in the Mexia Cemetery.  Don Corbitt, John Turpin, Charles Sims, Mike Clements, Rick Sadler, and Bobby Bailey will serve as pallbearers.

He was preceded in death by his parents, Calvin H. and Lula Mae Prowell; wife, Lillian Prowell; brothers, Bill and Ross Prowell. He was born and raised in Teague, Texas and graduated from Teague High School in 1947.

Calvin was a faithful Christian. He and Lillian attended and served as active members of the Northcrest Church of Christ for most of their married life. He served as an elder for 40 years and taught a Sunday morning Bible class for over 50 years. So, in addition to a faithful husband and father, he served as a teacher, mentor, and servant to many in the community.

Calvin had many other interests and pursuits. He worked for Berry-Barnett Grocery Company for 38 years and was President for about 20 years. Also, he worked for another grocery company in Ft. Worth for another 5 years before retiring. He was a real estate investor and developer, rancher, and grocery store owner. He was well respected by his community and peers, having served as President of the Texas Wholesale Grocery Association and President of the Food Merchandisers of America. His service to others did not stop when he retired. Calvin served as President of Limestone County Habitat for Humanity and helped build the first 8 habitat homes in the area. Also, he and Lillian volunteered at Parkview Hospital and hospice care. In addition to serving on the Board of Directors of Parkview Hospital, Calvin served on the Board of Bi-Stone Water District for many years.

The last years of his life were spent being the faithful caregiver for his wife until he was unable to continue in that role. They then moved to Mexia LTC in 2015 where they spent their remaining years.

To order memorial trees or send flowers to the family in memory of Calvin Dwain Prowell, please visit our flower store.