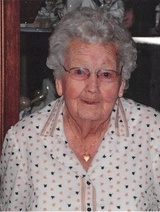 Johnnie Earline Ainsworth Owen, 88, passed away peacefully at her home in The Woodlands, Texas on April 9, 2014. She was born August 3, 1925 to Emma Mae Boaz Ainsworth and John Almer Ainsworth. Visitation with the family will be from 5:00 until 7:00 p.m. on Thursday, April 10th at Blair-Stubbs Funeral Home. Services will be held at Blair-Stubbs Funeral Home in Mexia on Friday, April 11, at 2:00 p.m. with Rev. Marcus Sheffield officiating. Interment will follow in the Wilson Chapel Cemetery. She was preceded in death by her husband, Cecil Clovis Owen and by her infant son, Edmond Eugene Litzler, from a previous marriage; brothers, Jesse Wright, Rufus Wright and Edgar Ainsworth; and sisters,Braddie Pruett and Minnie Martin. Earline is survived by her five children; Patricia Ann Brown, Cecil Dennis Owen, Emma Delmarene Rundell and husband, Gregory, Reta Marie Flores and husband, Julian, and Betty Kyle Ellis and husband, David. She also had 12 grandchildren; 9 great-grandchildren; and a soon-to-be, great-great-grandchild. Earline and Clovis raised their family in the Thiefneck community just south of Personville. She moved to a new home in The Woodlands years after his death. In 2010, she moved into Heritage Oaks Assisted Living in Conroe where she remained until October of 2013. At that time, she moved into a house in a retirement community in The Woodlands. Earline enjoyed living there with her flower and vegetable gardens. She would sit for hours admiring her flowers and watching the squirrels and birds. This past year with her has been a gift from God and we are all very grateful for each and every moment we have been able to share with her. She has brought more joy to our lives than you can imagine. We love her and will miss her dearly.

To order memorial trees or send flowers to the family in memory of Earline Owen, please visit our flower store.