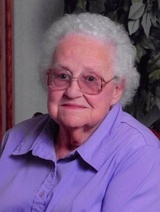 Elizabeth Ann Watson, 90, passed away April 27, 2014 in Denton, Texas. Funeral services will be 2:00 p.m., Wednesday, April 30, 2014 at Victory Baptist Church, between Groesbeck and Thornton, with Rev. Billy Anderson officiating. Interment will be in Round Prairie Cemetery in Seale, Texas. Visitation with the family will be from 5:00-7:00 p.m., Tuesday, at Blair-Stubbs Chapel in Thornton. Elizabeth Ann was born May 12, 1923 in Paris, Arkansas to Dewey and Golda Mae Parrot Lee. She lived in Brazosport for most of her life, then in Marque and the last 11 years in Corinth. Elizabeth Ann was an excellent seamstress and master quilter. She also enjoyed gardening, especially roses, and collecting hummingbird ornaments. She was an active member of The Red Hat organization. But, above all, she cherished her family; they were her pride and joy. She was preceded in death by her parents; husband, Robert Wallace Watson, Sr.; sister, Evelyn; and brothers, Richard, Bill and George Lee. Elizabeth Ann is survived by her son, Robert Wallace "Bob" Watson, Jr. and wife, Sandy of Denton; daughter, Patricia Ann Watts of Seale; 13 grandchildren; 23 great-grandchildren; 15 great-great-grandchildren; brothers, James Lee of Mesquite and Butch Lee of Houston; sister, Sue White of The Colony; and a number of nieces and nephews. Pallbearers will be Robert Douglas Watson, Brian Neil Watson, Christopher Wallace Watson, Matthew Charles Watson, Elizabeth Lea Watson and J.B. Watts.

To order memorial trees or send flowers to the family in memory of Elizabeth Watson, please visit our flower store.
Send a Sympathy Card