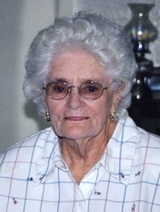 Eva Miller, 98, passed away in Mexia on September 10, 2016. She had been a resident of the Mexia LTC for the past three years. Funeral services will be 11:00 a.m., Wednesday, September 14, 2016 at Blair-Stubbs Chapel with Don Ellis officiating. Burial will be next to her husband in the Wortham Cemetery. John Ellis, Carmen Sanchez, Shanon Miller, Gail Cate, Keith Satterfield and Jakob Satterfield will serve as pallbearers. Visitation with the family will be 10-11 a.m., Wednesday, at Blair-Stubbs Funeral Home. Eva was born in Wortham, Texas on May 7, 1918 to Earnest and Mary Ila Cate Rogers, the oldest of five children. Eva married L.G. "Buddy" Miller on August 8, 1942. She lived most of her adult life in Mexia, where she raised her four children. Eva was employed at the Mexia State School and retired in 1979 after completing 22 years of service. She was a graduate of Wortham High School and returned to school, when she was in her early fifties, earning an Associates Degree in Childhood Development. Being loved by many residents at the State School, she was often referred to as "Mama Miller"; in their eyes, there was little that she could not do. In the kitchen, Eva could take a little something and turn it into the best meal you ever ate. She was making handmade quilts long before it became a fad to do so. Every year she and Buddy would plant a garden and, happily, share a bag or two of black eyed peas with everyone they knew. The best pickles ever made, came out of her kitchen. All of her girls wore "designer clothes" that were made on her old Singer, and later, an updated Kenmore sewing machine. Eating fried catfish and homemade ice cream will be remembered as some of the best times ever spent at the Miller's. You never found Eva's home in a mess, everyone was welcome and there was always something good to eat. She was preceded in death by her parents, Earnest and Ila Rogers; husband, L.G. "Buddy" Miller; two sisters, Mary Idell Cowart and Edna Frances Zuber; two brothers, Billy Morris Rogers and Estel Glynn Rogers; grandson, Carl Edward Cargile; and granddaughter, Jessica Ann Messer Barrientez. Eva is survived by a son, Ronnie Miller of Mexia; daughters, Linda Messer of Mexia, Joan Roberts of Temple and Kay Ellis and husband, Don of Alba; 12 grandchildren; 19 great-grandchildren; and 4 great-great-grandchildren.

To order memorial trees or send flowers to the family in memory of Eva Miller, please visit our flower store.