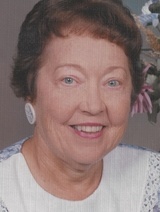 Fayma Henderson Hill passed away December 10, 2013 in Mexia, Texas at the age of 83. She was born January 23, 1930 in Mexia where she grew up, attending Mexia High School where she met the love of her life, John J. Hill who preceded her in death in 1995. She has gone to join him in heaven, forever together. Fayma graduated from Mexia High School in the Class of 1947. She then attended the University of Texas graduating in 1954 with a Bachelor of Arts in Education. She then went to Sul Ross State College where she obtained her Master's in Education in 1957. John and Fayma were married December 23, 1951 in Mexia and both were teachers and administrators in Odessa, Texas, Erie and Broomfield Colorado and Fayma continued her lifelong career in education in Longmont, Colorado at both Niwot and Longmont High Schools where she worked in the library and front office for 26 years prior to her retirement. She taught English and History and deeply enjoyed both subjects. She was always reading the "great American novels" and writing her stories of life in Mexia. After her retirement, Fayma relocated back to her home town of Mexia, wanting to reconnect with her childhood friends and church. She became a docent for the Mexia Public Schools Museum, wanting to help "Keep the Memories Alive". Fayma also became active with the First Presbyterian Church in Mexia, and was a member of the Morning Circle group, all of whom were frequent visitors to her home and became quite the extended family. Fayma is survived by daughters Fayma Lane (James) Callahan, and Kindra Dean Hill, Sister Virginia Hargrove and Brother Eugene Henderson, numerous cousins, nieces, nephews and a whole herd of loving friends and family. Fayma is preceded in death by her loving husband John J. Hill, parents, Thomas James and Laura Louella Gibson Henderson; sister-in-law Lois Marie Hill (Jim) Polvadore, brothers-in-law Larry and Bill Hill, sisters: Mary Catherine Henderson (David C.) Fowler, Sarah Elizabeth Henderson (James) Cotton, Emma Etta Henderson (Howard) Conner, and Grace Nan Henderson (Woody) Cherry. Brothers: Thomas Gathright Henderson, James Lionel Henderson, Dana Gibson Henderson. Memorial Services will be held Sunday December 15, 2013 at 2p.m. at the First Presbyterian Church of Mexia with graveside services and interment at the Mexia Cemetery. In lieu of flowers, donations can be made to Laras House, Limestone Animal Rescue Adoption Shelter c/o Henry and Mary Lain Commiskey, P.O. Box 190, Mexia, TX 76667.

To order memorial trees or send flowers to the family in memory of Fayma Hill, please visit our flower store.