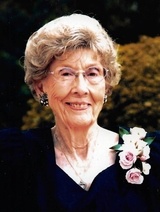 Hattie Lee Russell, 94, passed away on August 18, 2014 at her home in Prairie Hill, Texas. Funeral services will be 2:00 p.m., Thursday, August 21, 2014 at the Prairie Hill Baptist Church with Rev. Fred Sain officiating. Interment will follow in the Prairie Hill Cemetery. Visitation with the family will be 1:00 - 2:00 p.m., Thursday at the Prairie Hill Baptist Church. Hattie was born November 19, 1919 in Seymour, Texas to Joe F. and Ada Dell Parker Tippit. She married Joe F. Russell, Jr. on February 7, 1942. During World War II, she worked as a Secretary for a Defense Company in Dallas and completed her career as a Purchasing Agent for General Tire Company after 30 years of service. During her many years at Prairie Hill she was always active in her community, serving as Worthy Matron of the local Eastern Star chapter, organized and volunteered many years at the annual Prairie Hill Festival, and donated her time serving on the board of the Prairie Hill Cemetery Association and as treasurer of her Sunday school class at Prairie Hill Baptist Church. Hattie was a talented seamstress and quilter, winning many ribbons in various quilt shows. Making and donating quilts for the fall festival to raise funds for the community was something she looked forward to every year. Over the years she enjoyed taking piano lessons, joined a square dance group, took ballroom dance classes and competed in dance competitions, and continued dancing and visiting with friends at the Sul-Ross Senior Citizen Center in Waco well into her 90's. She was an accomplished cook specializing in homemade pies and brownies. In her last years, even when she was too weak to do anything else, she would make a batch of brownies for her friends and neighbors who stopped by to help her. Her biggest joy in life was her two grandsons and her great grandson. MawMaw was their biggest supporter and fan always cheering them on in their academics and sports. Family was special to her and she was definitely special to her family. She touched so many lives during her 94 years and will be greatly missed. She was preceded in death by her parents; husband, Joe F. Russell, Jr.; two sisters; four brothers; and one half-sister. Hattie is survived by her son, Joe Michael and wife, Dena Joyce Thomas Russell of Corsicana; two grandchildren, Joe Michael Russell, II and wife, Lauren of Belton and Matthew Thomas Russell and wife, Jenny of Houston; and one great grandson, Cole Alan Russell of Belton. Pallbearers will be Mike Russell, Matt Russell, Bruce Jordan, Doug Robertson, Bill Waldrop and Obed Bailey. Honorary pallbearers will be Billy George Waldrop and R. L. McClung. In lieu of flowers, memorials may be made to the Prairie Hill Cemetery Association or Prairie Hill Baptist Church.

To order memorial trees or send flowers to the family in memory of Hattie Russell, please visit our flower store.