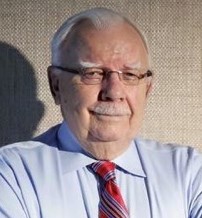 He grew up in Limestone County and graduated from Groesbeck High School.  Texas A&M University was his next stop on his educational journey, earning a Bachelor of Science degree.  In 1953, he joined the US Air Force where he served as a Navigator until 1957.  Returning home, he continued his education at the Baylor University School of Law, where he received his law degree.  Back to his Limestone County home, he served as the County - District Attorney and during this period of time, he married his best friend, Louise Carr in 1964.

Holloway went into private practice in 1970 and retired in 2017, after a long successful career.  A true Southern Gentleman with a disarming, affable and congenial personality, Holloway was a true asset to this area.  There are so many things that endeared him to the people he came in contact with, a colorful storyteller, a wonderful sense of humor, great family man, fine Christian and churchman, lover of his land and cattle, highly esteemed legal professional who enjoyed Louise working by his side for many years.

Holloway was a member of the First Baptist Church of Mexia, Mexia Lions Club, the Groesbeck Masonic Lodge #354 as well as being a Shriner and 32nd Degree Scottish Rite Mason.

He was preceded in death by his parents; and son, John Douglas Martin in 2012.

Holloway is survived by his wife of 56 years, Louise; daughter, Ellen Martin Ford and husband, Barry of Coppell and their 13 year old twins, Emma and Jake Ford; and brother-in-law, Robert Carr, III of Deming, New Mexico..

A private family graveside service will be held in the Faulkenberry Cemetery.

To order memorial trees or send flowers to the family in memory of Holloway Martin, Jr, please visit our flower store.
Send a Sympathy Card