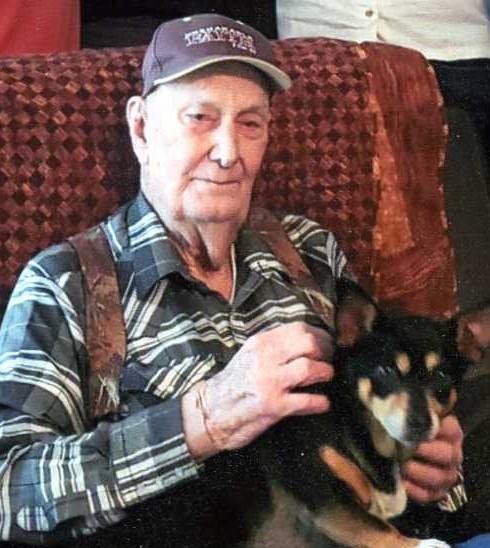 Howard G. Langford Sr., of Groesbeck, entered his heavenly home on August 4, 2022 at the age of 95.  Visitation with the family will be 2-3 p.m., Sunday, August 7, 2022 in the Prairie Grove Baptist Church in Mexia.  Funeral services will begin at 3:00, at the same location, with Rev. Clifton Jones officiating.  Interment will follow in the Prairie Grove Cemetery.  Clint Langford, Corky Langford, Jeff Arnett, Loren Anderson, Dylan Anderson, and Robert Pickens will serve as pallbearers.  Honorary pallbearers will be John Robert Rourke, Floyd Myers, Jerry Shields, Rick Herndon.

Howard was born February 1, 1927 in League City, Texas to Curtis Alvin and Nancy Theodosha (Lamouth) Langford.  Howard was also known, to many, by his nickname, “Bones”.  He was a graduate of Webster High School, Class of 1944.  While in high school, he began working for Pan American, which later became AMOCO, retiring with a combined total of 38 years.  After moving to Groesbeck, he worked 20 years for S & S Machine Shop.

Howard married the love of his life, Evelyn Altharee “Ree” Wilburn on December 16, 1944 in Galveston, Texas, after only knowing her for six weeks.  People said the marriage would never last, but it was truly a love story that lasted 75 years, separated only by Ree’s death in 2020.  What was the final chapter to a great love story, now begins their forever love story.

Howard’s love for God and family was exemplified by the way he lived his life.  Howard’s goals in life was to serve God, love his family, and work hard to provide for them.  He was a longtime active member of Prairie Grove Baptist Church.

Howard always had coffee going, usually all day, and everyone knew they had an open invitation to join him whenever possible.  Most Saturday’s, he and Howard, Jr. would have breakfast together then check and work cattle.

Howard liked to joke and have fun.  He enjoyed visiting and being among people; he never met a stranger.  He, also, loved his dogs, Echo and Bella.

He was preceded in death by his parents, Curtis and Nancy Langford; wife, Ree Langford; daughter, Evelyn Dale Copeland and husband, Wayne; and sisters, Laura May Burnett and husband, George and Rose Davis and husband, Hershal.

To order memorial trees or send flowers to the family in memory of Howard Grady Langford, Sr., please visit our flower store.