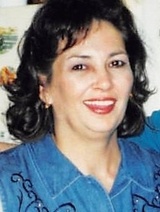 Jan Tillie Gorden Ashmore, 59, of Coolidge, passed away on May 16, 2015, with her loving family by her side. Her final days were spent surrounded by family and friends that Tillie had touched in some small way throughout her memorable life. Tillie was a life time resident of Coolidge and served as Postmaster there until retirement in 2012. She enjoyed 15 years of service with the United States Postal Service, and prior to that spent many years working at Bob's Grocery in Coolidge; however, her most prized position was that of Mother. Tillie was born November 27, 1955 in Mexia, TX, to Burney Gorden and Mary Beth Demoney. She married Jesse Young Ashmore on September 02, 1972. Tillie is survived by her loving family: her husband of 42 years, Jesse Ashmore; daughters, Carla Ashmore-Kutscherousky of Coolidge, Jessica Mazanec and husband Eddie of Waco, and son, Clay Ashmore and wife Keri of Tehuacana. She was affectionately known as Grammy to her adored grandchildren: Jillian, Cole, Jordyn and Jadyn Kutscherousky; Landri and Carson Ashmore, Jadrian Smith; and her newest precious addition, March Julia Mazanec. Survivors also include: sisters, Jenny Gorden of Hubbard; Julie Wasson and husband Bill of College Station; Linda Barham of Tustin, CA; brother, Ben Gorden of Coolidge, and sister-in-law, Melanie Ashmore of Austin. Survivors also include a host of special nieces and nephews, as well as great-nieces and nephews, and many beloved cousins and friends. Tillie was preceded in death by her parents; brother, Bill Barham; sister, Ina Rickard; and sister-in-law, Melinda Ashmore Sedlack. Funeral services will be, Monday, May 18, 2015 at The First United Methodist Church in Coolidge with Rev. Robert Barnett and Rev. Alfreda Henderson officiating. Interment will be in the Tehuacana Cemetery. Visitation with the family will be 5-7 p.m., Sunday, at Blair-Stubbs Funeral Home. Pallbearers will be Michael Young, Robert Young, Charles Thomas, Paul Barger, Monty Smith, and Robert Laughon.

To order memorial trees or send flowers to the family in memory of Jan Ashmore, please visit our flower store.