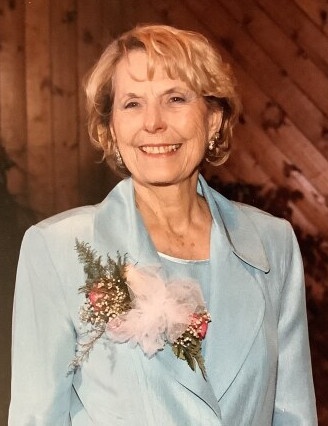 Janie Baker Hughes (1924-2022); Beloved mother, Christian and prayer-warrior. Janie slipped peacefully into the arms of her Savior on July 4, 2022. Psalm 46:5 says, "God is within her, she shall not fall, He will help her just at the break of dawn." Janie breathed her last at 5:50 a.m. as the sun rose over the Sandia Mountains, which she loved so well. She was born to sharecroppers, Ralph and Rilma Baker in Prairie View Community of Limestone County, south of Thornton. Ralph managed a farm for Uncle Lee Nance, on the banks of Mill Creek. It was in the Mill Creek community where Janie attended a Brush Arbor Revival meeting and was converted to Christ at age 12. Her grandfather Wm Aman was the church secretary when Prairie View Baptist Church was formed, and the church covenant was logged in his handwriting, signed by the original members. Janie never met Grandfather Wm Aman, as he passed during the influenza epidemic in 1919. At that time the 10 Aman children began an annual family reunion which continued for over 75 years.   Her playmates included children of the other Prairie View families: the Nances, Foxes, Vincents and her 17 Aman first cousins. Children learned to pray while picking cotton, praying for some cloud cover. Rilma would often ride a horse to pick up her children from school: Janie rode her own horse, Sonny sat in front of Rilma in the saddle, and Bryan behind it. The Aman farmhouse sat high on Bois D’Arc stumps and one of Janie’s jobs was to sweep the chicken poop out from under it. Singing camps and Revival meetings were the primary social activity at Prairie View, where the schoolhouse doubled as the meeting house. Methodist, Baptist, and Church of Christ ministers rotated duties and all the community attended one another’s services. Ralph played Guitar, fiddle and piano, and would “call” the steps when there were “Ring Games” at the meeting house (Baptists didn’t square dance). Ralph trained his family to sing parts. Hymn singing and scripture reading was a central focus in their family times. This was the “faith” environment that Janie and family were immersed in from birth.

After ranch foreman Ralph became Custodian at Thornton school and they moved to town. During this chapter bonus baby Linda was born.  Buddy and Sonny helped Ralph clean the school each afternoon and load the wood boxes. Janie took a job setting type for the Thornton Hustler newspaper. They lived one block from the school and each afternoon the Baker children with friends would parade through the house, stopping in the kitchen to grab a handful each of Rilma’s tea-cakes. Rilma was a resourceful woman and even during the depression always sent a nourishing school lunch. The other children tried to trade lunches with the Baker children.

Just after her graduation from Thornton School in 1941, one of Janie’s teachers, Ms. Virgie, called Ralph and said, “If you have Janie at the bus station in the morning she can take a civilian position in the WWII war effort.”  She was assigned to the US Army Signal Corp and attended radio school in Philadelphia conducted by Philco Electronics. She repaired radios at Kelly field in San Angelo for the AT-6 Fighter and other aircraft, until the close of the war.  In 1946 she met Army Sergeant Wm W. Hughes Jr. of Dallas, Texas who served as Army Weatherman in Fairbanks, Alaska, calling in weather reports for the allied pilots.  They married in 1948 and raised their four children, mostly in Dallas. Her mother-in-law Rose was a prayer warrior, and daughter of a circuit rider Methodist minister. Janie treasured her friendship with Rose. Rose was a renowned cook, whose name often appeared in the Dallas papers as hostess of Junior League, DARs, and other club gatherings. Janie owed some of her later success to the gracious mentorship of Rose.

Bill and Janie were the typical post-war baby boomer parents. They took responsibility in their church; Bill was a line engineer at Collins Radio, and very proud papa. Janie adored being a full time mom and adept home maker. When their 4th child died at birth, they handled it differently, drifted apart, and eventually divorced. She went to work as a law secretary, and later as Admin Assistant for the Executives of Bonanza International. In 1969 a God-moment shifted her meager fortunes when they offered Janie the Bonanza Steakhouse franchise in Albuquerque, NM, which they had just repossessed. She had little more than two used cars and $350 in savings. Taking a huge risk, she moved her family to Albuquerque and took over a restaurant which was already in the red.  Through the tenacity and virtues she learned growing up, and through the War, and by faith in God, she turned it around within 6 months. She became widely known in New Mexico as a successful businesswoman and restaurateur; and later President of the NM Restaurant Association.  She standardized their member requirements and made the “A” rating on the window of any NM restaurant carry true significance.  Through TV ads she unintentionally became something of a celebrity, but her heart was for people. She became a trained evangelist and participated in several crusades in New Mexico. She would commonly be seen sitting at a table with Bonanza customers, listening with genuine interest to their stories, and sharing the "Old, Old, Story". She was like a mother to her employees, counseling them, and expecting their best. Any young person who had Bonanza on their resume could get a restaurant job anywhere in the state. She and daughter Lyn were very engaged in pro­life ministries, and in sustaining America's freedoms.  Janie lived to see Roe V Wade overturned. They were foot soldiers for conservative candidates and causes, and helped run the polls every voting day, while they had health to do so.  Janie loved God’s Word, and she and Lyn were involved with Bible Study Fellowship for years.

She was a longtime member of Hoffmantown Baptist Church, and later years at Heights Cumberland Presbyterian Church. She was active in many ministries after her retirement, especially the transformational prayer group at Heights, praying for Albuquerque, America, and countries around the world. She walked with God and helped pray her children and grandchildren out of many tight situations, and into the productive godly people they've become. She was preceded in death by her daughter, Lyn; and son, Phillip who died at birth; brother, Bryan, and wife, Joyce; brother, Amon; and sister, Linda, and husband Glenn. She is survived by dear sister-in-law, Joy; son, "Bill", and wife Christine; son, Baker, and wife Jane; daughter, Elizabeth, and husband Wes; eight beloved grandsons; four beloved granddaughters; twenty-one precious great-grandchildren; many cherished nieces and nephews; and an abundance of cherished friends. Revelation 14:13 says, "And I heard a voice from heaven saying unto me, Write, Blessed are the dead which die in the Lord from henceforth: Yea, saith the Spirit, that they may rest from their labours; and their works do follow them."

To order memorial trees or send flowers to the family in memory of Janie Baker Hughes, please visit our flower store.