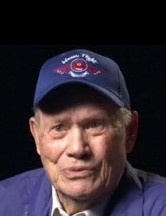 Bug, as he was affectionately known, was born September 17, 1925, in Corsicana to Jennings Bryan and Daisey Hawkins Paschal. He grew up and graduated from Corsicana High School, all the while helping out with the family’s ice business. After high school, he joined the Army and saw action in WW II in Europe and was in the Battle of The Bulge before being captured by the Germans. He endured frostbite and cruel treatment as a POW before he was liberated by the American troops and taken to France for recovery.

Back in Corsicana after the war, Bug, along with his brother Tom, owned and operated the local Stop and Eat, a car-hop type eatery, one of its first of its kind, and it was there that he met his future wife, Joan Jordan. He then ran, along with his brother, a Mobil gas station and after that went to work for Western Auto where he retired after 25 years.  Moving to Mexia in 1977, Bug was employed by Brown Oil and Gas – Central Texas Oilfield Supply as warehouse manager.

In his leisure hours, Bug and Joan enjoyed square-dancing with the Barn Stompers of Fairfield, traveling and camping with the Bi-Stone Travelers, listening to Country and Western music and anything involving his family.  He, also, loved banana pudding. He was a member of the First United Methodist Church of Wortham.

He was preceded in death by his parents, J. B. and Daisy, and his brother, Tom Paschal.

Memorial services will be held at 1 pm on Saturday, July 25, 2020, at the Blair-Stubbs Funeral Home chapel with the Reverend Brad Brittain officiating.

To order memorial trees or send flowers to the family in memory of Jennings "Bug" Paschal, please visit our flower store.