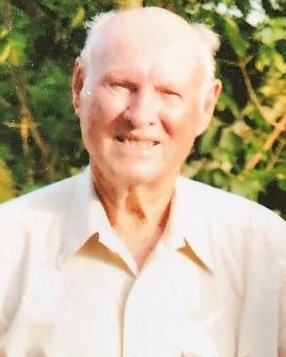 John Henry Fisher, formerly of Mexia, passed away February 18, 2021 in Pasadena, Texas at the age of 93.  A graveside service will be held at 2:00 p.m., Wednesday, February 24, 2021 in the Faulkenberry Cemetery with Rev. Shane Norcross officiating.

John was born July 17, 1927 in Thornton, Texas to Henry and Mary Ida (Holmes) Fisher.  He was a graduate of Mexia High School and attended college for a while.  John proudly served his country in the U. S. Navy.  He married his best friend and lifelong partner, Dorothy Juanell Cox in Fairfield, Texas on March 3, 1947.  He worked for John Hancock Insurance Company, in Houston, for many years prior to returning to Mexia and opening his own business, Fisher’s Auto Sales.

John and Juanell loved nothing more than having their home filled with their family as often as possible, especially, during the holidays. They enjoyed spending time with friends, dancing, and traveling in their motor home.  John particularly enjoyed eating the wonderful desserts that Juanell prepared or anything she cooked, he always said “she was the best cook ever”.

John was very outgoing, always greeted people with a smile and made friends easily.  In his early years, he loved to ride horses, go on trail rides, and performing at the Pasadena Rodeos as a member of the Pasadena Mounted Posse.  He also enjoyed fishing, playing dominoes, and going to the Senior Citizens’ Center.  He was a longtime active member of the Forest Glade Baptist Church.  He served for several years on the White Rock Water Board of Directors.  John was happy just interacting with people!

He was preceded in death by his parents, Henry and Mary Fisher; and his wife of 71 years, Juanell Fisher; and several siblings.

John's family would like to express their sincere appreciation and thanks to Juan Chavez for his many years of loyal friendship and dedication to John.

To order memorial trees or send flowers to the family in memory of John Fisher, please visit our flower store.
Send a Sympathy Card