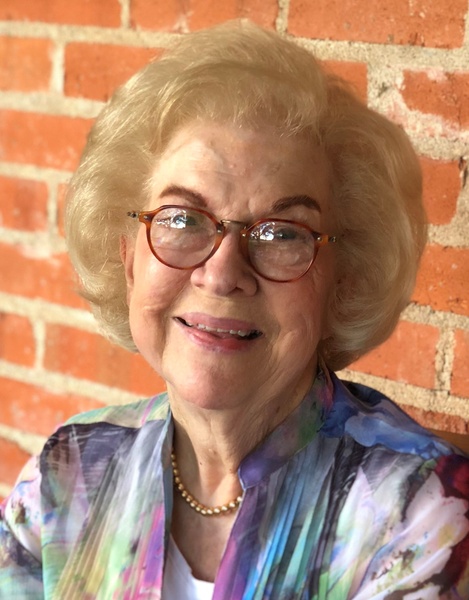 Joye Hall Mitchell (known by the family affectionately as Nana) went to be with her Lord on May 5, 2022.  She was born June 4, 1929—part of the “great generation.”  Strong character is a trait of that generation, and she was certainly filled with that, along with love, encouragement, and instruction which she provided to all she loved.  Joye was a leader with a servant’s heart—the blessed matriarch of the Mitchell family.

Joye grew up in hard times.  Her mom, Virginia Hall, was a saint and her best friend, but her dad was a hard man, and so she left home at a young age—but not before she won second in state in Tennis, her favorite sport.  (She taught ALL her family to play tennis).  Joye made her way to Austin where she graduated from the University of Texas with a bachelor’s degree in education, and a minor in art.

Joye was a teacher in Midland, TX, where she met her first love, Paul Parker, a geologist from Kentucky, who was on a team which discovered the Permian Basin oil field.  Today this is one of the largest oil fields in the world.  Her father purchased a lease in the middle of that field, and the family drilled the second well ever drilled in the Permian Basin.  After drilling several successful wells, Paul and Joye went on a vacation.  The day after they arrived home, Paul was stricken with an aortic aneurism at the age of 32, and Nana was left alone with a two-year-old baby boy.  Some believe Paul’s 34 bombing missions over Europe in WWII may have contributed to his early death.

Joye and her son, David, moved back to Austin where she began to teach again.  A little over a year later, her mom set up a blind date for her with Fred Mitchell, a Special Agent with the FBI.   They fell in love and soon married.  Joye was good at choosing—she married two heroes—both great men.   Fred adopted David, and soon resigned from the FBI to run the family oil business in Mexia, TX.  At that point, Joye began running the family ranch, and volunteered to teach music at the little country school in Forrest Glade, where she and Fred were active and supportive.

When David met the love of his life, Charlotte, they married at a young age; Nana and Papa immediately loved her as their own daughter.  Charlotte gained a “second” wonderful mom and she and David were so fortunate to have been able to raise their five children right next to Nana.  She touched all of their lives with grace and wisdom, and made each individual family member feel capable of doing anything they could dream of.  She encouraged their business endeavors, artistic and musical pursuits, travels, and was deeply instrumental in their spiritual walks.  Watching Nana’s mental toughness coupled with unequivocable, yet unobtrusive classiness was a daily lesson to her family.

Joye was a member of the church where David pastors, Park Meadows Church in Corsicana, where she played piano for many years—she adored her church family.  She also taught English and Art at Park Meadows Academy until she was well into her late 80s.   After Fred went to be with the Lord, Nana continued to live in her own home on the ranch right next to her dear family.  In her later years, her favorite things were to watch Downton Abbey, play piano, enjoy family dinners, and play dominos with her son, her grandchildren, and great-grands.  Nana nearly always won (at every sport and every game), she claimed it was because of being a lefty.

Nana won at the important things in life too.  She always put the other person’s interest first, not her own.  She built character into those around her.  She was this way because she had received the Lord Jesus Christ as her personal Lord and Savior at a young age, and studied the Word through the years, and continued to grow in her knowledge of Him all the days of her long life.   She spent time on higher things like becoming an excellent pianist, and an accomplished artist having painted many beautiful oil paintings, mostly copies of the old masters from the US Hudson River School of Art.  New York art collector, Graham Williford, once said Nana’s paintings were difficult to distinguish from the originals.

Nana’s kitchen was a favorite landing place for hungry grands and great-grands.  Actually, it didn’t matter if they were hungry, they were going to get an over-flowing plate of French toast, cinnamon bread, eggs, or some other delicious treat coming out of her oven no matter what time of day it was.  Her pound cake was the family favorite.

Nana lived to be one month shy of 93 and took her final breath in her own bedroom at the ranch she loved so dearly, with her family surrounding her.  She left behind a legacy that will continue through the hearts and lives of her “dear ones.”

Her son, David, expresses, “I can say this, God gave me the best mom in the world, world without end, and I will always be grateful to have lived with her, learned from her, and to have been loved by her during my formative years, and to have lived near her on the ranch all our days.  Out of about 130 games of dominos in 2021, she beat me by 2.  Out of 12 games this year she was ahead by 1.  When I was a kid, she used to beat me at ping pong until I cried, then she would walk away without letting me have a chance to catch up.  Well, she did it again!  She went to heaven one game ahead.  I guess I’ll have to try to catch up on that glorious day when we all meet again at the great hope of the church—the rapture!   I love you mom.  I will have you in my heart and mind every day, as I did when you were in this realm with me.  I will see you soon.”

Joye is preceded in death by her parents, Virginia Hall and Luther Waters, her step-dad, E.G. Hall, and by her two great loves, Paul Parker and Fred Mitchell.

Joye is survived by her son and daughter-in-law, David and Charlotte Mitchell; two grand-daughters and their husbands, Jenny and Colin Calvert, and Katie and Dave Huber; three grandsons and their wives, Paul and Julia Mitchell, Benjamin and Ashton Mitchell, and Matthew and Emily Mitchell; and twelve great-grandchildren: Tyler, Ella, Finn, Mady, Sam, Abby, Gemma, Parker, Fern, Ada, Winston, and baby Fred (due in a couple of weeks).  All lived close by and were around Nana nearly every day, so she was greatly loved and cared for.

A Memorial Service to celebrate Joye’s beautiful life will be held on Wednesday, May 11, at 6:00pm at Park Meadows Church in Corsicana, TX.  It will be immediately followed with Nana’s famous pound cake and coffee.

To order memorial trees or send flowers to the family in memory of Joye Lynelle Mitchell, please visit our flower store.
Send a Sympathy Card