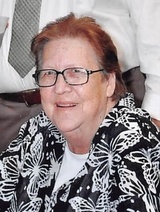 Katherine Elaine Oliver, 75, passed away January 3, 2015 in Tyler, Texas. Funeral services will be 1:00 p.m., Wednesday, January 7, 2015 at Blair-Stubbs Chapel with Rev. Shane Norcross officiating. Interment will follow in the Marquez Cemetery. Visitation with the family will be 5-7 p.m., Tuesday at Blair-Stubbs Funeral Home. Katherine was born July 8, 1939 in Marquez, Texas to Douglas Alfred and Thelma Estelle Newsom Sills. She moved to Mexia in 1983. Katherine owned and operated H & R Block from 1984 until she retired. She was a loving and devoted mother and grandmother. She was a young mother left to raise her three children at a young age, due to the death of her husband. Katherine was a strong woman and hard worker. She enjoyed watching football and game shows on TV and working crossword puzzles. In earlier years, she enjoyed playing Dominoes and card games with her family. She was preceded in death by her parents and husband, Haskel Oliver. Katherine is survived by her children, Anitra Green and husband, Bob of Streetman, Richard Oliver and wife, Ruby of Houston and Jennifer Clendening and husband, Kerry of Riesel; grandchildren, Timothy Green, Richard Oliver, Jr. Haskel Wayne Oliver, Tiffany Conway and Jennifer Marie Clendening; great-granddaughter, Jewel Lynn Oliver and soon-to-be, Kimberlyn Oliver; brothers, Butch Sills and Larry Sills; sisters, Peggy Campbell and Brenda Barrington; and a number of nieces and nephews. Pallbearers will be Timothy Green, Haskel Oliver, Richard Oliver, Jr., Richard Oliver, Sr., Robert Green and Kerry Clendening.

To order memorial trees or send flowers to the family in memory of Katherine Oliver, please visit our flower store.