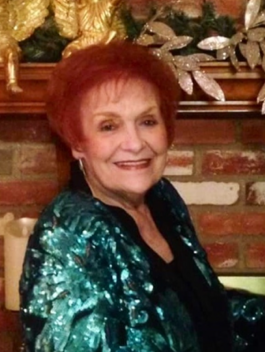 Jeanette was born April 1, 1937 in Glennville, Georgia to Charles McCoy and Alma Ree (Bland) Simmons.  While attending Ysleta High School, she received the honor of being runner-up for Beauty Queen and played the trombone in the band.  She worked beside her daughter, Linda and son-in-law, Dr. Tom Fox, Jr., for many years, in his dental office.  Having an outgoing personality and enjoying her job, she always greeted everyone with a friendly smile.

Jeanette’s life revolved around her love for God, family and friends.  She was a wonderful mother to three children, Steven, Rusty and Linda.  While living in Longview, she taught a Primary Sunday School Class.  One time she switched to the youth group, but returned to the class she loved, primary.  She was also involved in numerous Women Ministries over the years.  After moving to Mexia in 1984, she became a member of the First Baptist Church.

A book was written about Jeanette’s faith and the many challenges she encountered during her lifetime by Rethea Gambill, her very close friend.  The title of the book was “God and The Little Blue Bear”.  Jeanette’s main goal was to lead people to Christ and hopefully, help them find comfort and peace during troubled times.  She made an appearance on the 700 Club with the book and at a book signing, she was happily surprised when Dale Evans showed up unexpectedly.  The book is in several libraries, hospitals and churches and sold on Amazon.  Jeanette was proud of the book and felt the goal was accomplished after meeting so many people that were touched and comforted after reading it.

She was preceded in death by her parents, Charles and Alma Simmons; husbands, A. L. “Pete” Wallace and C. D. “Mac” McFarlin; son, Russell A. Wallace; sister and brother-in-law, Dottie and Russell Smith; sister, Margaret Simmons Jennings; and brothers, Johnny and Adriel Simmons.

Jeanette’s family would like to express their sincere thanks and appreciation to Hospice nurses, Kathie Bounds and Judy Angel, for the wonderful care given during her illness.

In lieu of flowers, memorials may be made to the Shriners, Virginia’s Hospice or the First Baptist Scholarship Fund.

To order memorial trees or send flowers to the family in memory of Lillian McFarlin, please visit our flower store.
Send a Sympathy Card