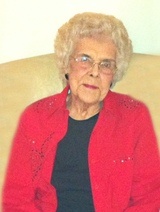 Lillie Mae Wylie Atkins passed from this life on April 3, 2016 in Corsicana, Texas. Lillie was born in Corsicana, Texas on August 26, 1917 to David Dixon Wylie and Charity Belle Wylie. She married Glenn Atkins on March 4, 1944 and they made their home in Mexia, Texas. Lillie began a career at Dick Scott Ford as a bookkeeper that spanned over 30 years. Lillie is survived by her niece and her husband, Ann and Don Lane of Hillsboro, Texas and her nephew and his wife, Mark and Cindy Wylie of Tyler, Texas. She is also survived by several great nieces and nephews. She was preceded in death by her husband of 31 years, Glenn Atkins; her parents; brother and sister-in-law, David and Barbara Wylie; sister and brother-in-law, Mary Belle and Fred Spivey; and niece, Freddie Davis. Lillie will be remembered for her sweet spirit and devotion to her family and friends. Her generosity to the First Methodist Church, as well as her community, was unmeasurable. She will be greatly missed by all. A special thank you to the staff at the Bowie House in Mexia where Lillie resided for the past four years. Visitation will be held at Blair-Stubbs Funeral Home in Mexia from 2 to 3 p.m. on Thursday, April 7, 2016. Graveside Services will follow at the Mexia Cemetery with Pastor Danny Niedecken to officiate. Family members will serve as pallbearers.

To order memorial trees or send flowers to the family in memory of Lillie Atkins, please visit our flower store.
Send a Sympathy Card