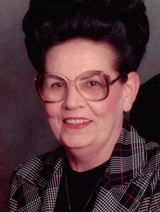 Louise A. Horn, 93, passed away September 8, 2014 at Cartmell Home for Aged in Palestine. Rosary will be held at 7:00 p.m., Tuesday, September 9, 2014 at Blair-Stubbs Chapel. A Mass of Christian Burial will be 10:00 a.m., Wednesday, September 10, 2014 at St. Mary's Catholic Church in Mexia. Interment will follow in the Land of Memory Cemetery in Palestine, Texas. Louise was born November 22, 1920 in Cotton Gin, Texas to Will and Frances Alexander Barkouskie. She retired from Murray's Corporation after 15 years of service as an inspector. She was a lifetime member of St. Mary's Catholic Church in Mexia, She was preceded in death by her parents; husband, Howard Horn; and sister, Dorothy Lahrmann. Louise is survived by her step-children, Dorothy Jean Brown, Billie Bacon, Mary Huffman and James Howard Horn, Jr.; sister, Bernadette Stone and husband, W. N.; and several nieces and nephews. Pallbearers will be Ronnie Barkouskie, Terry Bacon, Wade White, Steve Ferguson, Jason Stone, John Wayne Stone.

To order memorial trees or send flowers to the family in memory of Louise Horn, please visit our flower store.
Send a Sympathy Card