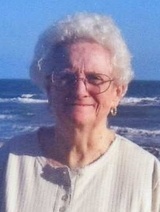 Marie Petery Henderson passed away May 27, 2017 in Mexia, Texas at the age of 84. A memorial service will be held at 2 PM, Tuesday, July 29, 2017 at St. Mary's Catholic Church. Marie was born September 25, 1932 in Flushing, New York to William and Mary Petery. Marie graduated from Flushing High School, Class of 1950. She married her loving husband, Gerald Henderson, on March 13, 1955 in New York, a few days after he was discharged from the Navy. They later moved to Dallas and returned to Gerald's hometown of Mexia, after he retired. Marie loved being a "stay at home" wife and mother. Her family was her priority in life and her pride and joy; she and Gerald were blessed with two daughters, Donna and Linda. She was the grandmother of three precious and loving grandchildren, Megan, Evan and Conner. Marie's love for children extended to the many other children that she baby sat in her home for numerous years. She was also a faithful member of St. Mary's Catholic Church. She was preceded in death by her parents; and husband of 62 years, Gerald Henderson. Marie is survived by her daughters, Donna Henderson of Mexia and Linda Mackie and husband, Merle of Germany; and grandchildren, Megan, Evan and Conner Mackie of Germany.

To order memorial trees or send flowers to the family in memory of Marie Henderson, please visit our flower store.