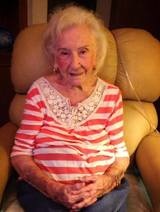 Mary Odessa Hancock, 100, of Mexia, a longtime educator and world traveler, died January 12, 2015 peacefully at home surrounded by her loved ones. . She was born on May 7, 1914, in San Angelo, where her father, the Rev. O.W. Milburn, was a circuit-riding Methodist minister after the turn of the century. He served at his last church as pastor in Tehuacana, where Odessa resided for several years. She and her late husband, Warner Douglas Hancock, were married in 1934. He served his country during World War II (1942-45) in the European Theatre, culminating in the Battle of the Bulge after which he completed college at Westminster in Tehuacana and attended Sam Houston State during the summers. He began teaching in Yoakum in 1950 and was there for one school year. Odessa and Warner moved to Shiloh in 1951 when he became principal while also teaching the seventh and eighth grade. Odessa taught third and fourth graders until the mid-1960s. She received her Bachelor of Arts from Sam Houston State and her Master's from East Texas State University in Commerce. Mrs. Hancock began her teaching career in Frosa (1943-45), then on to Prairie Hill from 1945 until 1949, and at Coolidge in 1949-51. She was a teacher at Shiloh from 1951 through 1965 before teaching in Mexia from 1965 until 1984. All of her teaching came in the second through fifth grades. An avid world traveler, Odessa made trips to Russia, England, Germany, Africa, Australia and numerous other exotic places, as well as through virtually all of the United States, including Hawaii. She also spent 20 years wintering in Harlingen. For over 50 years, she was a faithful member of the Mexia First United Methodist Church, where she taught Sunday School and sang in the adult choir. She was preceded in death by her husband, Warner Douglas Hancock, who died at the age of 65, when he was assistant principal of Mexia Junior High School, her parents, Rev. O. W. and Minnie Ella Milburn; sisters, Udean and Lucille, and their husbands, A. B. McBay and H. C. Smith, respectively. Also preceding Odessa is her daughter-in-law, Gloria Jean Hancock; and great-grandson, Trey Feverston; a great-nephew, Jeffery Keith McBay, and a great-great nephew, Jeffery Scott McBay. Family visitation will be Thursday, January 15, 2015, 6:00-8:00pm at Blair-Stubbs Funeral Home. Funeral services for Mrs. Hancock will be conducted at 10:00 a.m. Friday, January 16, 2015, at the First United Methodist Church of Mexia. Officiating will be the Rev. Brad Brittain, pastor of Central United Methodist Church of Waco. Burial will be in Mexia Cemetery, under direction of Blair-Stubbs Funeral Home. Surviving Mrs. Hancock are her son and daughter-in-law, Warner Dean and Jodi Hancock of Mexia; two granddaughters, Lisa Cherry and Donna Feverston and their husbands Joey Cherry and James Feverston; great-grandsons, Jake Cherry and Trenton Dean Feverston; She is also survived by a nephew, Don McBay and his wife Jerri, a great-nephew, Scott McBay and his wife Rene, and their daughter, Cameron McBay; a niece, Diana McBay Bradley, and her sons, Stephen and Mark Bradley; and a niece Janet McBay Daniels and her son, Jay and daughter, Ryan Lynn. Special family members also include Cathy and Cara Carson. Pallbearers are Jake Cherry, Trenton Dean Feverston, James Feverston, Stephen Bradley, Mark Bradley and Brian Bradley Honorary pallbearers are Bob Wright, Don McBay, Bob Hamilton, Joey Cherry, Scott McBay, Jay Daniels, Terry Reel III, David Allen Robinson and Weston Reed Robinson. The family expresses appreciation to Odessa's caregivers, Brandi Lyon, Ruby Hinson, Cynthia Johnson, Ashley Hudson, Samantha Jean Hagen; and appreciates the compassionate care from caregivers and staff at Wortham Medical Center, including Dr. Sharon Hale, and to Providence Hospice members, Jo Farris and Megan Holmes, who were always available to care for Mrs. Hancock.

To order memorial trees or send flowers to the family in memory of Mary Hancock, please visit our flower store.
Send a Sympathy Card