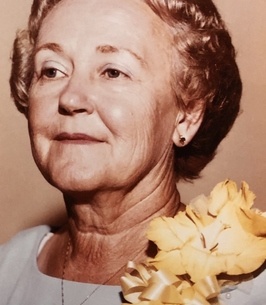 Mildred Peel was born March 6, 1924 in Pineville, Louisiana to Ted and Gladys Smith, their only child. After being an only child, she always hoped for a larger family. Mildred went to North Texas State Teachers College, and later trained at St. Joseph's Hospital in Houston for Medical Technology. St. Joseph's was not only a special place to work, it was important to Mildred's family as her children were all born there.

Mildred married Brooks Peel on September 15, 1945; they were blessed with three children. After her first two children were born, she stopped working for a while. Although she enjoyed her work, her family was her priority.

Later in her career, she worked in Research Hematology for Baylor College of Medicine. When she and her husband moved to their farm, she continued to work at a hospital in Marlin, Texas. Mildred was a dedicated member of Bellaire United Methodist Church where she taught Sunday School and was active in the Women's Society of Christian Service.

In her spare time, Mildred loved gardening, both in Houston and at her farm. She raised many of the vegetables for the family's consumption. She also kept the records of the cattle on their farm. Because of her dedication in keeping accurate records, her son called her "the Foreman".

Mildred has led a full and active life. She is described by her family as a caring person who was always willing to help.

She was preceded in death by her parents, Ted and Gladys Smith; and husband, Brooks Peel.

To order memorial trees or send flowers to the family in memory of Mildred Peel, please visit our flower store.