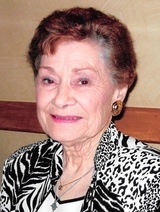 Mrs. Mozelle Bunch Mayes, 86, of Coolidge passed away Saturday, March 26, 2016 in Mexia. Mozelle was born March 8, 1930 in Coolidge to Mack M. and Cedora (Dora) Henderson Bunch. She started school in Delia (Limestone County) and graduated from Coolidge High School in 1947. Mozelle's first job, at the age of 13, was typing reports for a company in Coolidge. She worked at the Coolidge Telephone Company, while in high school, as an operator. During college, she worked at a café in Tehuacana as a waitress. After college, she worked in Ft. Worth and in Waco. In the 1950's, she was bookkeeper for Homer Bennett. In the 1970's, she went to work at the First State Bank in Coolidge. In the 1980's, she worked at the First State Bank in Hubbard, which changed names twice during the 17 years she worked there. She retired in 1997 from Wells Fargo Bank in Hubbard. Mozelle was a member of the Coolidge Garden Club and the First United Methodist Church of Coolidge. On September 18, 1948, Mozelle married her high school sweetheart, Arthur E. "Sonny" Mayes. They enjoyed 55 years of marriage before Sonny's death in 2004. Mozelle was preceded in death by her parents; sisters, Althea B. Moffett and husband, Carl and Elva B. Lee and husband, Bob; brother in law, John J. Sanderson; brother, Alvin Payton (Bud) Bunch; and son-in-law, Joe S. Rothrock. She is survived by her son, Neal Arthur Mayes and wife, Cindy Corby Mayes of China Spring; daughter, Lesa Cedora Mayes Rothrock of Coolidge; five grandsons, William T. (Will) Rothrock and wife, Janie of Mexia, Zachary S. (Zack) Rothrock and wife, Becky of Mexia, Corby A. Mayes and wife, Lia Joy of Fort Worth, Bradley A. (Brad) Mayes and Layne T. Mayes of China Spring; great grandchildren, Valerie M. Rothrock, Tatiana R. Rothrock, Joseph A. Rothrock and Lorilei A. (Angel) Rothrock all of Mexia; and sister, Aline B. Sanderson of Mexia. Visitation with the family will be 6-8 PM, Monday, March 28th at Blair-Stubbs Funeral Home in Mexia. Funeral services will be 2 PM Tuesday, March 29, 2016 at the First United Methodist Church in Coolidge with Reverend Robert Barnett and Reverend Bob Rainey officiating. Interment will follow in the Coolidge Cemetery. Pallbearers will be Will Rothrock, Zack Rothrock, Corby Mayes, Brad Mayes, Layne Mayes, Wilmer L. "Bill" Ward, Jack Ward and William R. "Bill" Ward. Honorary Pallbearers will be Scott Ray and Connie Mack Hancock.

To order memorial trees or send flowers to the family in memory of Mozelle Mayes, please visit our flower store.