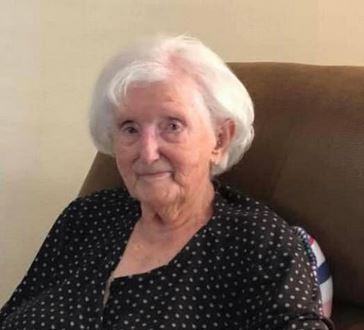 Odessa Ollie Shipes, 96, passed away peacefully at home surrounded by her family on January 22, 2022. She was born February 3, 1925 in Edom, Texas to Marshall and Nannie Sue Riley Brown.

Odessa loved her family above all else. Her husband and true love, Roy Henry Shipes, preceded her in death in 1979. She never had any interest in another male companion until she met a miniature Aussie Shepherd named Coco in 2006. They remained loyal and best friends until her passing. She loved puzzles and was an elite level quilter, and graced many of her family with beautiful creations over her lifetime. All hand pieced and hand quilted with love for those to receive them.

Odessa worked at the Mexia State School for many years. She had a heart of compassion for those in need, especially those unable to fend for themselves. After her retirement, she lived close to her children and grandchildren. She continued working as a caregiver for hospice patients, eventually retiring for good. From that point on, her life was interwoven with her love of family.

At age 95, she began teaching her children and even a couple of grandchildren, the game of 42. She was a sharp player and rarely lost. When she did, her claims of "having fun" somehow rang hollow for the rest of us. Her smack-talk game was on point as well. It was a true joy for her, and our love for the game and appreciation of her skills grew with each session. Odessa was fortunate to have a roommate/caregiver for the last year. Lori Ross became like another daughter to her, and they shared a close and important relationship until the end.

Odessa is survived by her children, Doris Schreider and husband, Robert, Johnny Shipes, Barbara Shipes, Henry Shipes and wife, Linda, daughter-in-law, Eileen Shipes, and son-in-law, John Hood. She is also survived by many grandchildren and great-grandchildren, along with her beloved dog Coco.

In lieu of flowers memorial donations can be made to Emmanuel Labor (A homeless ministry organization) emmanuellabor.org.

To order memorial trees or send flowers to the family in memory of Odessa Ollie Shipes, please visit our flower store.