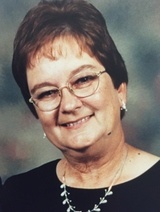 Patricia Ann "Pat" Elliott, 68, left at her earthly home in Buffalo, Texas and entered into her eternal home in heaven on March 8, 2016, following a very hard fought battle with cancer. Funeral services will be 2:00 p.m., Friday, March 11, 2015 at the First United Methodist Church in Centerville, Texas with Rev. Joy Richards and Pastor David Kennedy officiation. Interment will follow in the Greenwood Cemetery in Teague. Visitation with the family will be 5-7 p.m., Thursday, at Blair-Stubbs Funeral Home. Pat was born in Searcy, Arkansas on March 27, 1947. She married the love of her life, William S. "Bill" Elliott, Jr., on August 6, 1966. Their blessings together began with their two children, Clay and Kimberly, and continued with eight, and soon to be nine, grandchildren. Pat was a wonderful wife, best friend to her children and the greatest Nana. Pat had a tender, loving heart, a woman of strong faith and was, also, someone who could set you straight when necessary. She not only loved God, her family and friends but was easily accepting of all people. Pat's career, of many years, was as an oilfield purchasing agent with Premier Tradelink, one of the first women to hold this position. When Pat wasn't spoiling her grandchildren, she enjoyed working in the yard planting flowers, planting a vegetable garden or anything having to do with being outdoors. She was also an active member of the First United Methodist Church in Centerville, Texas and, prior to moving, a member of Cypress Fellowship Church in Cypress, Texas. Pat is survived by her husband of almost 50 years, Bill Elliott of Buffalo; son, Clayton Elliott and wife, Leah of Cypress; daughter, Kimberly James and husband, Matt of Cypress; grandchildren, Kaitlyn, Blake and Avery Elliott, Ethan and Ely Garza, Tanner, Jacob and Kendall James and soon to be, Chance Elliott; and brother, Ronnie Myers and wife, Gail of Searcy, AR. Pallbearers will be Douglas Gilley, Blake Elliott, Tanner James, Larry James, Dale Van Arsdall and Matt James.

To order memorial trees or send flowers to the family in memory of Patricia Elliott, please visit our flower store.
Send a Sympathy Card