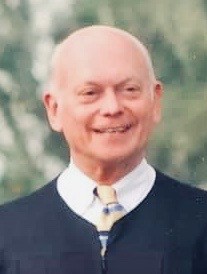 The Honorable Putnam Kaye (“P.K.”) Reiter, loving husband, father, father-in-law and grandfather, passed away suddenly on August 18, 2020 at the age of 87.

P.K. was born on November 19, 1932 in Mexia, Texas, to Wilhelm Arthur Reiter and Minnie Lucille (Denning) Reiter.  His family relocated to Houston, where he graduated from Lamar High School.  He attended the University of Oklahoma, where he was a member of the Navy ROTC and Lambda Chi Alpha fraternity, graduating in 1955 with a Bachelor of Science in Geological Engineering. P.K. went on to honorably serve his country in the United States Navy, attaining the rank of Lieutenant Junior Grade. He resumed his education at the University of Oklahoma, graduating in 1961 with a Master of Science in Engineering.

Upon his return to Houston, P.K. joined his father and brother in the family oil and gas business. While in Houston, he had the great fortune to meet the love of his life, a beautiful redhead named Margaret Frances Anderson. They were married in Houston on December 20, 1965, and began their life together with P.K. continuing to work with the family oil business. When the family business needed an oil and gas lawyer, in typical P.K. fashion, he decided he could do that himself and enrolled in law school.

While in law school, he and Margaret had their first two children, Margaret Frances (Cutrer) and Lucille Reiter (King). He graduated with a Juris Doctorate from the University of Houston Law Center in 1969, and began the practice of law. They had two more children, Kaye Reiter (Fleming) and Putnam Reiter. After practicing law for several years, P.K. along with his brother and best friend, Bill Reiter, moved their families to Mexia in 1975.

In Mexia, P.K. hung a shingle and practiced law in Limestone County until 1978, when he was appointed Judge of the Seventy Seventh Judicial District Court by Governor Bill Clements. He retired from the Seventy Seventh Judicial District bench in 1989 and became a visiting Senior District Judge, working in counties across the state, most frequently presiding in courts in Harris County and Montgomery County.

During their nearly five decades in Mexia, P.K. and his brother Bill jointly operated a small family oil exploration and production enterprise, Luke Gas Corporation, Warrior Resources, and Reiter and Reiter. P.K. and his brother spent innumerable weekends together working in the oil field and keeping Shiner Bock in business. After Bill’s death in 2011, P.K. continued to operate the family business, carrying on the avocation he shared with his beloved father and brother.

P.K. served faithfully for 45 years as a member of Christ Episcopal Church in Mexia, committed to assisting church governance on the Bishop’s Committee, dedicated to promoting education on the Scholarship Committee, and assisting with worship services as a lay minister.  He was a frequent participant in the Mexia Men’s Prayer Breakfast, where he met and exchanged stories and ideas with a number of lifelong friends. He was a member of many professional organizations, including the Society of Petroleum Engineers, the Houston Bar Association, and the State Bar of Texas. One of his favorite yearly events was the Annual Texas Judicial Conference where he would spend the evenings with his judicial colleagues and tell war stories into the wee hours, enthusiastically agreeing to tend the bar.

P.K. had a breadth of knowledge on a generous array of subjects. Ever the engineer, he could build or repair pretty much anything—if he didn’t immediately know how, he would figure it out no matter how long it took.  He was equally at home presiding in the courtroom, cooking in his kitchen, playing in the oilfield, volunteering in the church, tinkering in his workshop, or working in his Mexia office. He supported his family, friends, and colleagues in any manner he could. He spent countless hours helping others, without complaint or expecting something in return. P.K. had a generous, giving spirit and boundless energy. He treated all he encountered with respect and kindness. He was truly an exceptional person, whose loss feels all the more substantial because of the stewardship he faithfully exhibited to his family, friends, faith, and community. We are all better for having had P.K. Reiter in our lives and in this world. Though we grieve this monumental loss, we are ever grateful for the gifts he left us all.

P.K. is preceded in death by his parents, and brothers William (“Bill”) Arthur Reiter, Jr. and Jesse Oscar (“Jock”) Reiter. He is survived by Margaret Anderson Reiter, his beloved bride of 54 years, as well as their four children, Margaret Frances Cutrer (Richard) of Mexia, Lucille Reiter King (Chris) of Houston, Kaye Reiter Fleming (Ryan) of Seattle, and Putnam Ervin Reiter of Oklahoma City. He is also survived by his pride and joy, his seven grandchildren, Andrew Reiter, Natalie King, Nathan Fleming, Alexander Reiter, Denny Fleming, Claire King, and William Fleming, as well as numerous nieces, nephews, cousins, and many dear friends made during his travels on the oil, law, and church circuits. He is also survived by his faithful canine sidekick and companion, Richter.

To order memorial trees or send flowers to the family in memory of Putnam Reiter, please visit our flower store.
Send a Sympathy Card