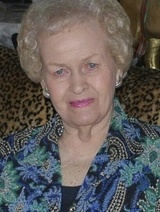 Ruby Jewell Holloway, 88, passed away July 5, 2015 in Waco, Texas at Hillcrest Hospital. She was born July 3, 1927 in Roane, Texas to Johnny and Blanche Aven. Later her family moved to Tupelo and Powell where she attended junior high and high school. Mrs. Holloway is survived by her husband of 72 years, John Marion Holloway; one daughter Barbara Smith and husband. Robert Pat; two sons, Ricky Holloway and wife, Patti and Jon Holloway and wife, Melanie; five grandchildren, Tiffany Hansen, Mark Batte and wife, Chris, Lauren Cathey and husband, Billy Joe, Scott Holloway and wife, K.K., and Brooke Holloway; great-grandchildren, Josh Hansen and wife, Faith, Jordan Hansen and wife, Destiny, Taylor Batte, Hunter Batte, Landon Batte, Chance Cathey, Caitland Cathey, Coker Holloway, Hunt Holloway, Pep Holloway and Avyn Wilson; great-great- grandchildren Ryland Hansen and Sawyer Hansen. She is also survived by sister-in-laws, Donna Aven, Lynn Aven, and Sue Clark and husband, John; nieces, Jerry Aven, Gina Chandler, Gayla Gober and husband, Gary, Karen Ewing and husband, Greg: and nephews, Obie Lockhart and wife, Joyce, Joey Lockhart and Susan, and Tim Aven; and numerous great nieces and nephews. Mrs. Holloway is preceded in death by her parents; her sisters Hazel Lockhart; Helen Featherston and husband Ernest; brothers, Leon Aven and Billy Aven; and nephew Jackie Aven. Visitation with the family will be Thursday, July 9th from 12:30 PM to 1:30 PM at the First Baptist Church. Funeral services will be Thursday, July 9, 2015 at 1:30 PM at the First Baptist Church with Rev. Marcus Sheffield officiating. A graveside service will follow at the Resthaven Memorial Park, 5400 W. Hwy 31, Corsicana, Texas 75110 located West of I 45 between Trailridge Dr. and Balcom. Those serving as pallbearers include Mark Batte, Scott Holloway, Josh Hansen, Jordan Hansen, Tommy Ray, Billy Cathey, David Brubaker and Cole Taylor. Mrs. Holloway's life revolved around her family. She loved spending time with her children and many grandchildren, who affectionately called her ‘Granny.' She was a long time member of the Mexia First Baptist Church. Ruby served as a volunteer at her church and General Mexia Hospital. She was a dedicated ‘stay at home mother' until her children were grown at which time she started her career. In 1960, Ruby was selected as ‘Most Courteous Salesperson' in Mexia and was selected as ‘Outstanding Woman of the Year' in 1967 and 1976. She was chosen as ‘Woman of the Year' by the Business and Professional Woman's Association District V in 1977, served as President of that organization for three years, held every other elected office and served on the State Nominating Committee in 1968 of that organization. She worked at Mexia State School for eighteen years where she served as 1st Vice President for one year, then two years as President of Mexia State School Chapter No. 56. She served as Activity and Food Chairman for four years, Board of Directors for two years, Task Force Committee in 1974-75, State Chapter Organization Committee in 1972, and was elected to the State Board of Directors. She served three years as Chairperson of the Credentials Committee for the Annual Meeting and member of the Annual Meeting Planning Committee. She was elected delegate to the Annual Meeting for six years. In addition to her duties as President Elect and 1st Vice President, she attended numerous meetings throughout the state representing numerous leaders. During her career at the State School she served as the first woman President of the Texas Public Employee Association for two terms, receiving an award from Governor Dolph Briscoe. Also, while working for the State School she attended night classes at Navarro and McLennan community colleges for two years. Ruby left Mexia State School to manage the Drilling Rig Motel for twelve years. During this time she also became owner of the Drilling Rig Restaurant. She retired from both businesses to travel the United States with her husband, John. The family would like to extend their heartfelt gratitude to all of the physicians, nurses, chaplains, and staff of Hillcrest Hospital in Waco, Texas for their compassion and wonderful care. In lieu of flowers, donations may be made in her honor to the First Baptist Church Memorial Fund, 500 E. Carthage, Mexia, Texas 76667.

To order memorial trees or send flowers to the family in memory of Ruby Holloway, please visit our flower store.