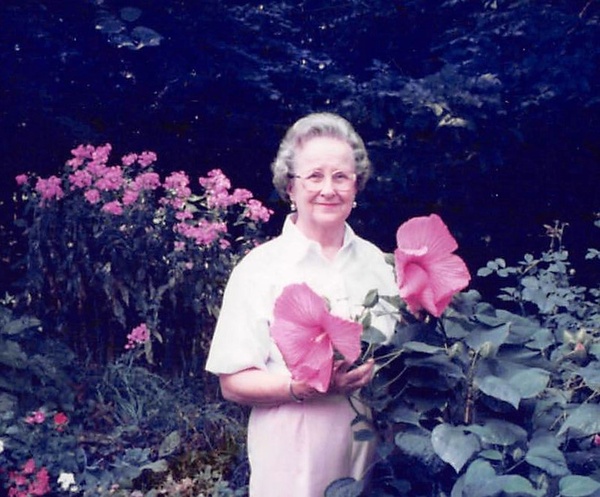 Shirley Frances Kennedy Peery, of Thornton, passed away August 11, 2020 in Palestine, Texas at the age of 99.  Funeral services will be 10:00 a.m., Saturday, August 15, 2020 in the Central Baptist Church in Thornton with Rev. Tracy Sims officiating.  Interment will follow in the Thornton Cemetery.  Doug Podell, Duane German, Roger Watson, Shannon Kilpatrick, Ronnie Driskell and Brandan Verm will serve as pallbearers

Shirley was born in the Prairie View Community, Texas to Cassie (Jackson) and Christopher Columbus (Lum) Kennedy.  She was the oldest of three girls.

Shirley was married to Charles “Maurice” Peery for 72 years, prior to his passing in March 2011.  Ma and Pa (as they were called by kids) lived in several places while Pa worked for Halliburton.  California was Ma’s favorite place of all the moves, and it was from there that Pa retired.  They returned to Thornton in 1973 and started life among family and friends again.  She loved Thornton.

Shirley was a quiet lady yet surprisingly she and sister, Zell, would hunt snakes as children!!  She truly loved her family and friends.  She enjoyed just sitting and visiting and cooking for her family, which they loved!  Especially Zeb, who loved “Maw Maw’s fried chicken!  He knew a visit to Thornton meant her fried chicken!  He went often!  Katherine had her favorite too, Maw Maw’s squash, and as long as Katherine kept eating, Maw Maw kept cooking!

Shirley was an excellent seamstress and made most of clothing for herself, drapery for homes, even clothes for Ronnie and Mike.  Ronnie remembers Ma making a dress for Sis (Mary Carter – who was close in age to Ronnie) and he was the reluctant model!

Although Shirley was not living in Thornton the last four years, she was always remembered by her friends from Central Baptist Church.  Especially, Judy and Ronnie Driskell who would visit when in the Palestine area.  Thank you.

Shirley is survived by two sons, Ronnie (Totsy) and Mike (Lecil); grandchildren, Zeb (Amanda) and Katherine James (Matt); four great grandchildren, Blaine and Brenna Peery and Wyatt and Elizabeth James; her dear sister, Mary Carter (Sis) Slaughter and her children; and numerous other relatives and friends.  She will be greatly missed.

Shirley is now reunited with Maurice, her precious sister, Zell, parents and many more family and friends.  May they all rejoice together.

To order memorial trees or send flowers to the family in memory of Shirley Peery, please visit our flower store.
Send a Sympathy Card