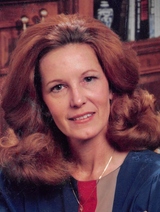 Susan Patricia Lee Bleakney, 67, went to be with our Lord on Wednesday, March 19, 2014. Funeral services will be 2:00 p.m., Monday, March 24, 2014 at St. Mary's Catholic Church in Mexia with Father Benji Magnaye officiating. Interment will follow in the Point Enterprise Cemetery. Visitation with the family will be 6-7 p.m., Sunday, at Blair-Stubbs Funeral Home with Rosary at 7:00 p.m. Susan was born June 9, 1946 in Mexia, Texas to John E. and Patsy Lee. She was raised in Mexia and graduated from Mexia High School. On December 21, 1966, she married the love of her life, William J. "Bill" Bleakney. They lived in Dallas, for a time, where Susan was employed by the Traveler's Insurance Company and Bill was employed by Interstate Theaters. Later, they moved to McAllen, Texas and then to Anchorage, Alaska. After two years in Alaska, they returned to McAllen and opened a business, South Texas Archery. After several years there, they purchased Archery Country in Austin where they remained until Bill's lost his battle with colon cancer in 2000. Susan moved back to Mexia and went to work for the Mexia State Supported Living Center. After returning to work, she completed her Masters Degree in Rehabilitation. Susan impacted many lives in a very positive way. She was very vivacious and saw the good in everything. She was also very artistic and creative, outgoing and gave her everything in whatever she did. She was preceded in death by her father, John Lee; mother, Patsy Brown; step-mother, JoNell Lee; husband, Bill Bleakney; and brother, John Edward Lee. Susan is survived by her brothers, Robert E. Lee and wife, Beverly and their children, Rebecca Mulneix, Zachary E. Lee and Daniel Mulneix and Kurt Brown and wife, Michelle; sisters, Melinda Duryee and husband, Bill and Tammy Fuller and husband, Jerry; sisters-in-laws, Margaret Ann Bleakney of Mexia and Vellia "Billie" Lopez; nephew, John Edward Lee, III and wife, Jennifer; several other nieces and nephews; and many other relatives and friends. Pallbearers will be Robert Barham, Gerald Eddings, Lanny Findley, Jonathan Lee, Al Boytis and Richard Sandifer. The entire family wishes to express their gratitude to Robert, Beverly and Zach Lee for the extraordinary care they gave Susan during her illness.

To order memorial trees or send flowers to the family in memory of Susan Bleakney, please visit our flower store.
Send a Sympathy Card