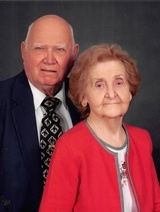 Valle Louise Stevenson Bain, 90, of Mexia, passed away February 21, 2015 at her home. Funeral services will be 2:00 p.m., Tuesday, February 24, 2015 at Blair-Stubbs Chapel with Rev. Marcus Sheffield officiating. Interment will follow in the Mexia Cemetery. Visitation with the family will be held prior to the service, starting at 12:30 p.m., at Blair-Stubbs Funeral Home Chapel. Louise was born December 16, 1924 in Frost, Texas to Thomas William and Lessie Caldwell Stevenson. Upon completion of college, she moved to London, Texas where she taught first and second grade for London ISD. Louise met Tolbert Earl Bain, Jr. while he was attending Texas A & I in Kingsville. They married on July 14, 1951 in Frost, Texas. They moved to Mexia, Texas in 1954 to raise their family. Louise enjoyed the joys of motherhood; she participated in serving as a school room mother, Brownie, Girl Scout, Cub Scout and Boy Scout Den Leader and anything else in which her children were involved. She served as election judge for the Forest Glade Community. She also served as an officer for the Lord's Acre for the Methodist Church in Frost, Texas for 25 years. Louise was a member of the First Baptist Church in Mexia. Louise enjoyed traveling either by car, motorcycle or with the Bi-Stone Travel Club. In addition, she and Tolbert attended 20 years of the USS Ommaney Bay Ship Reunions of which he served during WWII. She was preceded in death by her parents; husband of 62 years, Tolbert Earl Bain, Jr.; eight brothers (two of which never returned from WWII); and two sisters. Louise is survived by her daughters, Karen Gray and husband, Bob of Huntsville and Sharon Cargile of Mexia; sons, Thomas Bain and wife, Cathy of Glen Rose and David Bain and wife, Jeanette of Mexia; grandchildren, Leigh Ann White, Brandon Bates, Jennifer Bain Haynes, Jonathan Tolbert Bain, Misty Bain Murphy, Phillip Michael Bain, McKenzie Bain, Marty Cargile, April Self and Jeffrey Cargile; 17 great-grandchildren; and two great-great granddaughters. Serving as pallbearers are Ronnie Stevenson, W.R. (Bob) Gray, Brandon Joe Bates, Jonathan Tolbert Bain, Jeff Haynes, Phillip Bain, Marty Cargile, Jeff Cargile, Benny Murphy and Joe Self. Louise's family would like to express a very special thank you to her caregivers, Jessie Barton, Misty Murphy, Charolette Sawyer, the late Judy Guest and Providence Hospice of Mexia. Memorials may be made to Providence Hospice of Mexia, First Baptist Church, any cancer or heart fund of choice. Please visit www.blair-stubbs.com to leave the family a memorial message.

To order memorial trees or send flowers to the family in memory of Valle Bain, please visit our flower store.