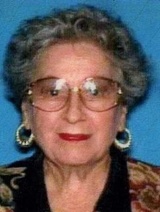 Vida Evelyn Hogan, 97, of Thornton, passed away July 4, 2016 in Marlin, Texas. Funeral services will be 2:00 p.m., Thursday, July 7, 2016 at Blair-Stubbs Chapel in Thornton with Mr. Floyd Stanley officiating. Interment will follow in the Cobb Cemetery. Pallbearers will be Mike Brown, John Banks Campbell, Rand Bates, Kenneth Capps, Bill Jackson and Raymond Harlan. Visitation with the family will be 7-9 p.m., Wednesday, at Blair-Stubbs Chapel in Thornton. Vida was born in the Honest Ridge community on June 25, 1919 to George and Hattie Brooks Jones. They moved to the Seale community when she was a small child. She attended school there but graduated from Marquez High School. Vida was a good student, always eager and quick to learn. When she graduated from Jr. High into High School, she was the highest ranking student in the class and had to go all the way to Franklin to give a speech. Vida enjoyed playing sports; she would gather with a group of kids to play baseball, which was her favorite. She also liked to play volleyball, was a member of the Pep Squad and enjoyed riding horses. As a child growing up, church played a very important roll in her family's life. Although growing up in a Baptist church, after marrying R. W., they joined the Thornton Methodist Church as their children enjoyed attending Vacation Bible School there and more youth activities were offered. After graduating high school, Vida moved to Groesbeck and worked at several business. She lived with the Gilpin family, help take care of their small daughter and, later, lived with the Carl Sadler family. Vida thoroughly enjoyed the time she spent there and was very fond of them her entire life. Vida met her future husband, R. W., at a Thornton Homecoming dance. She had, previously, dated his brother but never met him. After marrying in 1941, they made home in Thornton. R. W. passed away in August 1993. Although they were always involved in raising cattle, their first and lasting love, they also farmed cotton, corn and peanuts; owned bulldozers, cleared timber, dug tanks for many local landowners and mowed right-of-ways, in several counties, for the state for many years. Vida took a big lead in taking care of the cattle as R. W. took care of the other daily operations. She was also the accountant taking care of the banking, insurance, payroll and all other duties involved. She was a good "parts runner". She was a "doer" and a very hard worker. Vida and R. W. made a good team; he was also a hard worker and they enjoyed it every step of the way. She still enjoyed working with the cattle and remained involved, even if it was from the sideline "giving orders", until about eight years ago. Vida loved and enjoyed her children, Mike and Mary Ann, grandchildren and great grandchildren. She was very active during Mike and Mary Ann's school years, serving as room mother for many years and hosting Easter Egg hunts at their home. Her oldest grandchild, Tara, spent every summer with "Mama Too" and Granddaddy. They had a special bond and as Tara called her, Vida was her Mama Too". Vida also enjoyed babysitting her other four grandchildren, Ryan, Greg, Kenneth and Shelly and loved them dearly. Vida was an active member of the Thornton Methodist Church as long as health permitted. She was a Board Member of the Tidwell Cemetery, located west of Thornton, for many years. R. W.'s ancestors are buried there; she helped in restoring the cemetery, which began in the early 1980's, and the construction of the overhead pipe entrance. The many qualities that Vida possessed were strong willed, a wonderful cook, patient, kind, put others' needs before hers, very knowledgeable and wise, willingness to help others, her love for the Lord, great sense of humor and her everlasting love for all her family. She was preceded in death by her parents, George and Hattie Jones; husband, R. W. Hogan, Jr.; an infant son, George Robert Hogan; brothers, Roy and Odes Jones; and sisters, Gussie Dossey, Ola Craig McCurry, Tina Buchanan, L. T. Padgett and Gladys Neyland. Vida is survived by her loving children, Karl Michael Hogan of Thornton and Mary Ann Truett of Kosse; grandchildren, Tara Archer Johnson and husband, Russ of Thornton, Ryan Hogan of Thornton, Greg Hogan of Bremond, Kenneth Hogan and wife, Molly of Groesbeck and Shelly Hogan of Thornton; great-grandchildren, Hogan and Grant Johnson; step great-grandchildren, Nick Johnson of Pleasanton, TX and Sadie Johnson of Richardson, TX; sister, Helen Jenkins of Groesbeck; and numerous nieces and nephews. Vida's family would like to acknowledge and thank prior and current caregivers, Peggy Forge, Sue Johnson, Mary Alice Reese, Shirley Gibson, Sherry Raymond, Mesa Salazar and Lisa Alewine for the loving care and support given during her illness. Memorials may be made to the Tidwell Cemetery Association, %Mary Ann Truett, Treasurer, 706 N. Mignonette, Kosse, TX 76653 or the Thornton United Methodist Church. .

To order memorial trees or send flowers to the family in memory of Vida Hogan, please visit our flower store.