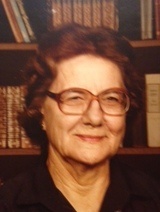 Wilma Lee Asher Mansel, 97, passed away June 22, 2016 in Mexia, Texas. A graveside service will be 10:00 a.m., Saturday, June 25, 2016 in the Shiloh Cemetery. Visitation with the family will be 5-6 p.m., Friday, at Blair-Stubbs Funeral Home. Wilma was born in Mexia, Texas on November 20, 1918 to Ollie Eugene and Ethel Clancy Asher. She married Jack Lester Mansel on June 30, 1936 in Mexia. Wilma became an insurance agent for Germania Insurance Company and opened the first insurance office in the West Columbia area. She was a member of the First Baptist Church in West Columbia and of the Easter Star Chapter #61 in Alice, TX. She was preceded in death by her parents; husband, Jack Mansel; son, Jackie Mansel; grandson, Gary Mansel; and brother, Cecil Asher. Wilma is survived by two great-grandsons, Dustin Mansel and Devin Radford both of West Columbia, TX; two great-great-grandchildren; two nieces, LaVonza Barkouskie of Mexia and Carolyn Doss of Salado; also a number of nieces and nephews from the Asher & Mansel families.

To order memorial trees or send flowers to the family in memory of Wilma Mansel, please visit our flower store.